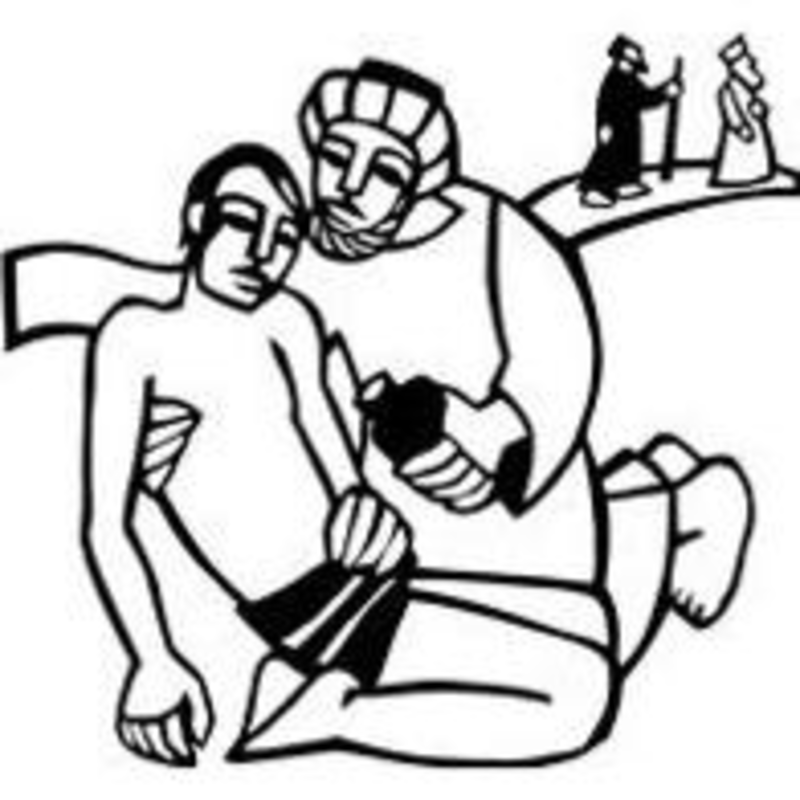 This week Church of the Cross helped lead Day Camp together with St. Luke Cedar Hill and St. George Cadboro Bay. We enjoyed five mornings of song, prayer, fellowship, crafts, snack time, games, and Biblical story telling. I am reminded this week about the importance of Christian education for children. This is where we provide a unique role as church in the world, raising kids in the faith. Hats off to all the volunteers who kept the camp running smoothly.

One of the songs we sang at Day Camp is Draw the Circle Wide. It’s a descriptive title. It’s about drawing wide the circle of the love of God. The second line is “Draw it wider still.” This is a song about ever expanding circles of inclusion. I think of the ways kids understood this song at a visceral level. Even very young children know what it is like to be excluded from a friend group or playing at recess. They have already experienced ways in which they or other kids have drawn circles too narrow to include everyone around them. On the surface “draw the circle wide” sounds like a truism like “be nice to people”, “do good things”, “don’t do bad things.” However, there is a reason we need these kind of reminders. On a closer look we tend to draw the circle just wide enough to include ourselves. Once we’re inside the circle, whether we realize it or not, we have a tendency not to want to expand the circle, because we experience a privilege from being in while others are out.

Lenny Duncan in his new book “Dear Church” published by Fortress Press holds a mirror up to the Lutheran church, asking questions about drawing the circle wide. Duncan reflects upon today’s gospel reading, the Parable of the Good Samaritan. He wonders how it is the church has avoided seeing itself as the priest or rabbi who walk by the injured man. In a recent tweet Duncan summarizes the parable this way: “The question in this week’s lectionary “who is my neighbor” is the same question we been asking for 2,000 years. It is antithetical to the Gospel. But we ask my queer, black, immigrant, poor, disabled, formerly incarcerated, are they really my neighbor?” Jesus replies “Yes.”

This week the Evangelical Lutheran Church in Canada (ELCIC), Church of the Cross’ denomination, met in Regina, Saskatchewan, for National Convention. This is a gathering at which the church conducts its business every two years. At this gathering during time for questions following a resolution about diversity in the church, one man from Manitoba got up to address the chair. He said he spoke in favour of the resolution, but then went on a rambling tirade about how while the church needs to address white supremacy it needs to take the feelings of white men like him into account. A self-avowed progressive he uttered a string of racial slurs. His comments were so bad the National Bishop uttered a tearful apology the following day for not intervening while the man was speaking and for not immediately counteracting his speech afterwards.

While I was not present at the gathering in Regina I reviewed the video of the live stream of the man’s remarks and the national bishop’s apology. It struck me listening to the man just how commonplace and comfortable he was with his racist rambling. I doubt it even occurred to him what he was saying was racist. Because in fact he stated he was speaking in favour of the motion, except he felt he was somehow excluded as a white man from a widening circle that explicitly centres brown and black people by naming white supremacy. Quite simply this is a whole lot of nonsense. This is just another subterfuge like the lawyer in the gospel reading who asks, “who is my neighbour?”

“Who is my neighbour?” is always a reflexive question. It’s always a way of trying to get out of being held accountable.

Thinking about people injured alongside the road, I think about queer folks in the Anglican Church of Canada. The church at its General Synod this week in Vancouver voted on marriage equality. In the end despite a supermajority support from the house of laity and house of clergy, the house of bishops failed to pass the motion short three votes. This dealt a crushing blow to full inclusion in 2019 all because a powerful minority of church leaders are given this veto power. This is 99% of the church recognizing the wounded person on the road and 1% of naysayers being given the power to decide the church will not stop to offer first aid to the wounded person. What does it mean to be church at a moment like this?

Local Anglicans offered opportunities for mourning and empathy on Saturday with open doors for prayer in their churches. I saw on-line some people responding to the sad news bragging that their own denominations are more progressive. This is tacky and lacks empathy. That’s like taunting people with diabetes in the US about cheaper prices for insulin in Canada. Let’s make live-saving measures available and affordable for everyone. Let us tend to our wounded and fallen Anglican neighbours who need our empathy and love. They also need our anger and solidarity. Things start getting better when people decide they’re not going to sit down and take it anymore. They need us to be in their corner for them when they decide to take action.

Thinking about making the circle wider, I also think about our picnic yesterday at Island View Beach. We invited Indigenous neighbours to share a meal together. These are small steps heading in the right direction. I recognize there is disappointment wishing the turnout would have been greater. I am grateful for the presence of Rose Henry who came and shared her insights into reconciliation. She gave a succinct definition of reconciliation. She said, “reconciliation is taking action.” She outlined different ways in which we can take action for greater justice. One notable example is that we need to take action in order to make communities safer for Indigenous women and girls. Rose invited us to join her and other Indigenous leaders from both the US and Canada to gather at the Peace Arch in Blaine, Washington that straddles the border in October. They will be gathering to remember Murdered and Missing Indigenous Women and Girls, calling political leaders to account ahead of the Canadian federal election later in October. Each of the events the Truth and Reconciliation has organized, including the talks with Charla Huber and Adam Olsen, are steps toward taking action. These are steps toward building relationships. Even when not every event goes according to plan, we take another step forward, and learn importance of patience and resilience. One hard lesson I learned doing church and community organizing in Virginia is when people do not always attend our events, how can we get out and support the events of the people we want to get to know? Perhaps this is an opportunity for us to show up to the events being organized and led by Indigenous people in their spaces. Often this work takes years to build trust and build relationship. I thank you all for your perseverance and faithfulness in this work together.

I realize the continual emphasis on justice feels like a lot at times. But we keep our focus on Jesus’ love in the midst of these widening circles of grace. After all, we too are recipients of grace every day. Claimed and loved by God we are enough despite our weird idiosyncrasies, our differences, our difficulties. We are enough. Our wounds are also nursed and tended to by the Samaritan along the road. For Lenny Duncan, despite all his critique, is filled with love and longing for the church. Why else would he write a book and continue serving as Lutheran pastor unless he deeply cares? He envisions a church in which God’s grace prevails. His own story of becoming Lutheran is one of radical welcome and inclusion. He recounts being invited to receive communion during worship without reservation. There were no additions, “as long as you’re Lutheran, as long as you’re good enough, as long as you’re baptized.” It was an open table in which nothing of his past was dredged up, even though it was an odd bunch of mainly white folks gathered around the table. He felt genuinely welcome and included. And he continues to believe that grace is the Lutheran church’s best kept secret. How do we reveal the church’s best kept secret? How do we share the good news of grace with those who are ailing? We think about those who under siege of white supremacy, our queer Anglican siblings, and inroads into taking action together with Indigenous neighbours. Let us imagine ways in which we can draw the circle wide and draw it wider still.

This is our moment to listen to Jesus’ calling. To have the courage and empathy of the Samaritan, a man who was excluded from many circles as an outsider, understanding that for the person injured along the road has his very life at stake.

I believe that now is a moment of great potential, a time when great things can happen. In the midst of uncertainty and fear, we can step up as church and point to a different way, rooted in grace.

And we step forward not as one more work among many. Not in constant toil and striving, but buoyed by the same grace Jesus extends to each one of us. Receive that grace, especially in the midst of suffering and pain, and know you are not alone. We are not alone, but filled with love, sent out to serve the neighbour we find along the road. Amen.