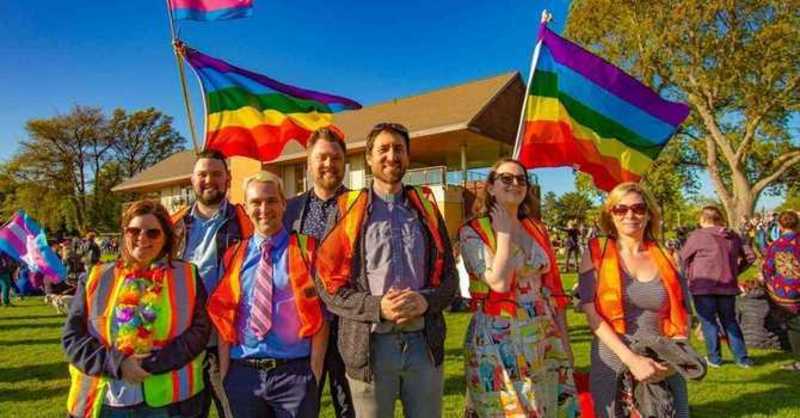 At last Thursday’s pro-SOGI rally at Oak Bay there was a fourteen year old speaker who I’ll call Sarah. They had the following words to share: "I just want all the kids to know it's okay to be you. And if a grown up tells you otherwise, they suck." Not every teenager has the courage to address a crowd of a couple hundred people and share these kinds of truths. Feeling buoyed by the support of the crowd she exclaimed: “And who cares what all the haters in there think,” which was met with cheers, so they said it again. Sarah was pointing at a room upstairs in the Oak Bay rec center. There Jenn Smith an anti-SOGI speaker was giving the equivalent of a hell and brimstone sermon on BC schools adopting SOGI, which stands for Sexual Orientation and Gender Identity. SOGI offers guiding principles protecting students in the LGBTQ2S+ community in BC schools. Smith was sponsored by the Christian Lobby, an extremist Christian group in Campbell River, leading a four-part speaker series on the island, concluding with Thursday’s event in Oak Bay.

Some might wonder why all the fuss about a speaker who attracted a supportive audience between 20 and 30 people to the event in Oak Bay. I am reminded about a recent event in Denver. LGBTQ Nation writes in an article dated May 3: “Denver resident, Amber Nicole, a transgender woman, was attacked and severely beaten outside of a bar. Her jaw was broken and her face was left partially paralyzed…Her friend drove her straight to the hospital. While bystanders can be seen in the video, no one stepped in to assist.”

We need to be careful thinking this kind of thing would not happen in Canada. There are no genuinely safe spaces for trans people. I think about an eighteen-year-old at the Thursday gathering who said they used to feel safe in Victoria until coming out two years ago and on several occasions having people yell homophobic slurs at them downtown and none of the bystanders said anything or intervened. They have felt unsafe in Victoria ever since, especially at night, even among crowds of people downtown.

The anti-SOGI event in Oak Bay, spreading misinformation about trans people and children, normalizes this kind of hate speech and hateful attitudes towards our trans neighbours. For this reason it takes hundreds of people gathering together in love saying, “No, we won’t stand by while you slander our friends, our neighbours, and family members, our beloveds.”

From Saul to Paul

Is it any wonder that Ananias in Acts hesitates when God tells him in a dream to accept a calling to go visit Saul. Saul had been undertaking a campaign of genocide, murdering followers of Jesus, interrogating leaders at synagogues to turn over any followers of the Way. And Paul did not simply realize the error of his ways and stop committing genocide. He was struck down from light from heaven, blinded, and did not eat or drink for three days. Only after God struck Saul down, did he reconsider his hateful and violent ways. Only when Paul was ready to repent, then God sends Ananias to heal him. We can imagine Ananias’ hesitation. How could he really know that Saul genuinely had a change of heart? It took a leap of faith, trusting God was with Ananias in this holy calling.

Fast-forward to today, it’s not really surprising that queer folks don’t trust the Saul’s in the world. They also don’t trust their defenders, voices that say be civil, give them a chance, keep an open mind, even if they say you don’t deserve to exist or that you’re an abomination before God. No, queer folks are going to fight tooth and nail for their very existence.

Those of us with relatively more privilege and security, if it was us, wouldn’t we defend the lives and rights of one another, our families, ourselves? If there was a Saul raging in our midst we wouldn’t just shrug our shoulders and say, “Well, I guess there are two sides to every story.” We wouldn’t sit down and take it. We would organize and we would pray for the kind of divine intervention we hear in Acts. We would pray God changes their hearts in radical way. Until all the haters undergo radical conversion, we have a calling to protect queer neighbours and to shut down talks like the one in Oak Bay which sow lies, distrust, and the threat of violence.

Our own Road to Damascus

And yet we know that seeds of hate don’t just exist “out there” but in our own hearts. Where do we find ourselves on our own Road to Damascus this Sunday? What are ways in which God is calling us to repent, to undergo our own Easter death and resurrection just as Saul converted from Saul to Paul?

This doesn’t mean that we all need to have a literal conversion story like Paul in order to be legitimate Christians. Jesus meets us where we are. For some it may involve a radical conversion and for others it might be a relationship that is built over time and that’s okay.

So too with dismantling hateful views in our hearts and churches, this is work that is not over and done with after a single dramatic event. This is something that we work at over time. We live out our baptismal covenants one day at a time, as Luther says, remembering each morning that we are baptized Christians. And if we’re not yet baptized that’s okay too. We’re all on a journey together with God and with one another. We offer big tent of hospitality as long as no one is trying to burn down the tent or attack one another. We draw the line at excluding people on the basis of discrimination and hate. Those who reject Jesus’ call to love their neighbor unconditionally have already excluded themselves from community. Hate excludes itself and we don’t have to apologize for defending people on the margins. Jesus repeatedly defends those who have the least privilege.

Easter is Not Over

Turning to our gospel reading from John, we are reminded that Easter does not end on Easter Sunday. Jesus continues to be with us just as he is with the disciples post-resurrection. Jesus appears on the beach, which is a geography we can identify with in Victoria. Jesus meets the disciples at the moment they are most discouraged, coming back to shore empty-handed, not catching a single fish. However when Jesus tells them to cast their net on the right side of the boat, they catch more fish than their net can hold. Only then they recognize Jesus, after they catch the fish.

Isn’t the case for us too? So often we fall into scarcity thinking. We doubt whether our plans are going to work out. We worry there isn’t enough to go around, that there is a finite amount of love or grace to be divided. And yet the Easter gospel reminds us that through Jesus there is enough. We worry whether enough people will support a new initiative, and then after the fact, we recognize God was present and we give thanks that our prayers have been answered.

And we are called to practice being resurrection people. Easter doesn’t end with Easter Sunday. The resurrected Jesus continues to be present, active in our midst.

I think about an answer to prayer on Thursday. When I arrived at the Oak Bay rec center at 5:30 PM I worried whether enough people would show up. It began with a small trickle for an impromptu rainbow picnic and then over time the numbers grew. Pretty soon a dozen groups of people were sharing a picnic together. As though heeding Jesus’ command to Peter, they began feeding the sheep. People began sharing trays of cookies, veggie and fruit platters. There were popsicles. For those of us out on the grass it felt like a joyful party. Those who went inside the hall had a different experience. They were doing the hard work of enduring listening to something nasty, taking up space out of love, while activists engaging in direct action disrupted the talk with chants and drumming. The crowd supported allies inside. In the end prayers were answered. Love abounded. And everyone shared what they had with one another.

As the hall was emptied activists emerged victorious, met with cheers of welcome. One of those running out on the grass saw Pr. Lyle and I giving us words of both challenge and encouragement. They shared that their parents were both Anglican priests serving in another province. They said, “It’s good to see clergy here. You know Jesus would have been in there shutting this down. Jesus turned over tables and drove out hate.” And then their tone softened, “Mainly I’m really glad you are here. Thank you for coming.”

Those are the words we needed to hear at that moment. Words of challenge, encouraging us to be better and also words of grace, thanking us for showing up.

I think about that fourteen-year-old finding their prophetic voice speaking at a rally. It gives me hope that the kids are alright, knowing they’re not going to let us get away with inaction. I am heartened that there are kids with passion and courage.               I am also reminded that at times our queer neighbors need to know we are there for them. They need reassurance we will intervene when unrepentant Sauls threaten them. We hope and pray God changes all our hearts and minds, so that hate gives way to love.

We remember that Easter is not just a one-time event. Easter is not over on Easter Sunday, but rather the risen Jesus continues to fill us with grace and love. Let us imagine a world beyond scarcity to one overflowing with grace for all of us gathered in here and in our communities. Amen.